Hailed as the King of Liverpool, Rory Storm was the focus of the monthly Mersey Beat event at Fort Perch Rock New Brighton on Sunday 23rd September.

Former members of Rory's band The Hurricanes turned out, with some reliving stories of their times with him; including Vince Earl, and Jimmy Tushingham. Also recalling memories along with a slide show was Rory's sister and former Mrs Shane Fenton, Iris Caldwell. She also brought along copies of a new CD featuring previously un released material recorded by Rory and the band and found in a cellar. For further information on Rory Storm click on his name. 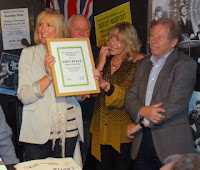 Rory's guitarist Johnny Guitar was posthumously inducted into the Mersey Beat Hall of Fame, with a certificate accepted by his widow.

Also receiving a presentation on the afternoon was singer David Garrick "Dear Mrs Applebee" who received a framed collage created by artist Tony Booth  of his photos and other memorabilia to mark his birthday. In the photo L-R Joe Flannery, David Garrick, Tony Booth. 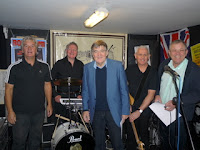 Live music was provided by Vince Earl and the Attraction. Vince is probably best remembered nationally as a comedian & actor finding fame on Channel 4s TV soap "Brookside" as Ron Dickson. The Attraction features a number of stalwart merseyside musicians including drummer Dave Lovelady from "The Fourmost"

The afternoon was compered by Harry Prytherch formerly drummer with the Remo 4, other notable mersey beat and 60s faces in attendance were promoter Joe Flannery (brother to Lee Curtis), Dave Williams (Dale Roberts & The JayWalkers, Group One), Geoff Nugent (The Undertakers), promoter and revivalist Alan Crowe, David Garrick (Dear Mrs Applebee), Tony Booth (poster artist who painted many of the original Beatles and other concert posters) and Tony Davis (The Spinners),

The BBC had a film crew in attendance interviewing the different musicians, filming the audience for a feature on BBC Look North.

These afternoons are held on the 3rd Sunday of every month and include interviews, a quiz, memorabilia stalls, and live bands. Fort Perch Rock also houses an extensive display of Elvis, Billy Fury, Beatles and other memorabilia.

Photos courtesy of John Bailey.
Posted by Unknown at 02:22