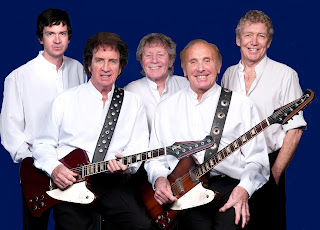 Thanks to Tony Crane of the Merseybeats and Golly Goulding of Bright-More Promotions , I was invited to launch my book 'The Long Road' on this special night. When I arrived at the venue an hour before the start time of 7.30pm the fans were already queuing round the building.
The first half of the evening saw us being entertained by the Monkeymen a lively 4 piece outfit who gave us music from the 50's 60' and 70's, interspersed with humorous asides between band members, After an hour they gave way to the exciting Paul Hayes Collection. As always they were well received by the audience. Paul took this opportunity to tell the audience that he was making his last performance with the band due work commitments. He then introduced his replacement Michael who is clearly a talented vocalist. He was also the MC for the night.
There was a tremendous atmosphere in the room as we waited for the Merseybeats to take the stage. Their arrival was greeted by a huge round of applause that continued well into the first song. The place was jumping from start to finish of their performance the talent of these guys is amazing right through from Tony Crane Lead vocals and Lead Guitar, Billy Kinsley Rhythm Guitar, Bob Packham Bass Guitar and backing vocals, Tony's son Adrian on Keyboards to Lou Rosnthal on drums and percussion their musical ability is of the highest calibre. Add to that the incredible vocal harmonies that Billy and Tony have been providing since before The Mereybeats started more than 50 years ago, Bob's own vocal contributions added to his skills on guitar and Adrian's excellent contribution on keyboards and you are hearing the very best of sixties music, performed by the best exponents of the sound you will ever hear.
It would be easy to forget Billy's talent as a musician when you are listening to his voice, but suddenly you are reminded by a brilliant piece of work on harmonica or Rhythm Guitar, to enhance a particular song.
Speaking of individual skill I have to mention Adrian's brilliant cameo on Lead Guitar on the occasion he stepped away from his Keyboard. The talent in the Crane family has to heard to be believed.
The musical selection as we have come to expect is superb, they are singing their hits, 'I Think Of You' , Sorrow, the incredibly haunting performance of 'Don't Turn Around' made the hairs on the back of my neck stand up as always. But that's not all added to their own wealth of hit's they also pay tribute to and sing the songs of other sixties stars, The Walker Brothers, The Beatles and as Billy himself said the incredible Everley Brothers to name but three.
But don't be deceived The Merseybeats are in my opinion the best vocal harmony group of their generation but, wow can they Rock and Roll, the dance floor was full of people jiving and just dancing in there own way, lost in the sheer joy of the wonderful music being played by this fabulous band.
There is another side to the members of the band, they don't forget their friends, Billy introduced the fans to an old Primary School friend who was in the audience and dedicated a song to him. Then Tony introduced the The old Troy Shondelle song dedicating it to his friend Dave Lodge. This song is very special to Tony and I for very different and private reasons so I was deeply moved that he did this, though not surprised as I know him to be a thoroughly decent man. That said it must be at least twenty years since he last performed this song at it maybe another twenty before he performs it again.
They ended the show with the anthem, 'You'll Never Walk Alone' as Billy said this song is not about football , it is about justice and I am sure every person there knew where he was coming from.
What an incredible night if you take my advice if you see The Merseybeats advertised, beg or borrow do what ever it takes to get the money to go and see them, because whatever it costs they are worth every penny!!!
Posted by Unknown at 13:32