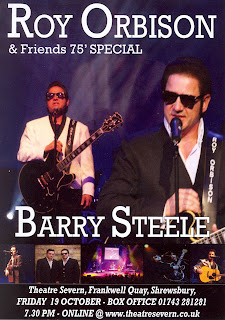 I went along to see what I thought was going to be another in a long line of tribute bands, how wrong could I have been. This was no tribute band but a full, well produced show that happened to feature a number of excellent performers who paid homage to their chosen idols - Roy Orbison, Johnny Cash, and Elvis Presley.

The stage setting included banners promoting the show either side a giant screen along the back of the stage and as the lights dimmed up on the screen came "Bill & Ben the flower pot men" followed by an advert for Shell petrol with Bing Crosby singing the jingle, these put the audience in the right time frame as the opening credits rolled onto the screen as the band took to there places.

The host of the show Roy Orbison (Barry Steele) took to the stage performing a number of classic Orbison hits before introducing the first of his special guests for the night - Johnny Cash (Peter John Jackson). An excellent performer who certainly knew how to use his guitar not only as an instrument but as a prop with great effect, also brilliantly playing two harmonicas on "Orange Blossom Special". Time for the next guest, the king himself - Elvis Presley (Paul Molloy) before Roy Orbison returned to close the first half of the show.

The second half opened with "Thunderbirds Are Go" on the screen with Orbison opening with some more hits from the Orbison catalogue before bringing back Johnny Cash with more great numbers. The band then played The Shadows "Apache" musically excellent but personally I would have liked to have seen the three guitarists take centre stage and perform as The Shadows. Keyboard player Barney Williams returned to his post as Jerry Lee Lewis belting out "Great Balls of Fire" and "Whole Lotta Shakin". Enter Elvis for his second spot of the night, only this time in GI mode more great numbers from this fine performer before Orbison closes the show with several numbers from the Travelling Willburys and of course "Pretty Woman" with both Cash and Elvis joining him for the finale.

Throughout the show camersa caught the performers live and put them up onto the screen along with archive film footage of the original stars.

With costume changes, stage settings, excellent lighting & effects, first class musicians, well rehearsed performers, plus unforgettable songs this show has it all, I look forward to seeing it time and time again, hopefully so will you the reader.

As I said in the beginning this was not just a tribute act but a fully, well produced show and credit to its producer Lynne Steele.