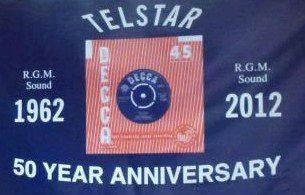 Whilst the media is hyping the 50th anniversary of The Beatles making the charts with "Love Me Do" and are perceived as being the ones that changed the worlld of popular music, lets not forget that the music and fashion culture changed in the 1950s with the birth of Rock n Roll.

It should also be pointed out that "Telstar" by The Tornadoes and produced by Joe Meek is also celebrating its 50th anniversary of not only making the UK charts but also the American charts..
Posted by Unknown at 02:00