The monthly Merseybeat Story took place at Fort Perch Rock New Brighton on Sunday 17th March. MC for the afternoon was revivalist DJ Ala Cra (Alan Crowe) who had travelled up from Mid Wales, and who as each month got the afternoon off to a flying start with a 60s music quiz with a few questions that got the audience scratching their heads.

Next up was Don Woods a longtime Liverpool musician who treated the crowd to a number of songs that they could sing a long with, a few irish numbers because it was St Patricks day. Following Don's spot, he was inducted into the Merseybeat story Hall of Fame by Dave Williams another longstanding Liverpool musician. 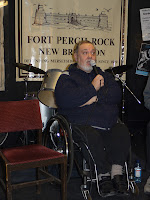 Following a short break Don Woods interviewed Arty Davies a drummer with numerous Liverpool bands over the years, who talked how he never let his disability (Polio) stop him from achieving. This was followed by Dave Williams interviewing the Panda Footed Prince of Prance - Faron of Faron's Flamingoes.

If you were present why not add your comments!
Posted by Unknown at 06:36