QUEEN FOR THE NIGHT 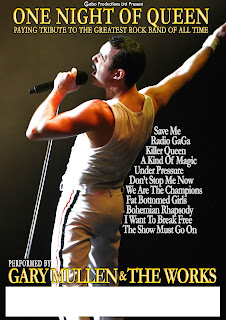 ONE NIGHT OF QUEEN, THEATRE SEVERN SHREWSBURY FRIDAY 17th MAY 2013


I  never got to see Queen live themselves, but I am sure this will be the closest I am going to get to seeing the originals. Gary Mullen & The Works if you haven't seen them is a must for all Queen fans.

If this band was a sporty car then they went from zero to top gear within seconds and it was like that all the way through both halves of the show. From the opening bars of We Will Rock You to Don't stop Me Now to close the first half, then the entire second half closing with We Are The Champions, Gary and the band certainly rocked us prooving that they are the champions, when it comes to Queen tribute acts.

With a powerhouse of a band behind him, Gary was going to take no prisoners, and showed what a great showman he is, using every bit of the stage available to him, working the audiences, till they gave in dancing in the rows, clapping and singing along.

I am sure he was relived when it was interval time, I know I was time to give my hands and voice a rest, take five and reduce the pace but it was over all too soon and back into top gear for the second half, finding the cruise control mid way as Gary changed the tempo to give us "Love of My Life" with just a 12 string guitar accompaniment, before hitting the throttle once again with Jail House Rock, Bohemiam Rhapsody, Crazy Little Thing Called Love, with Radio Ga Ga, and We Are The Champions making up the encore.

Concerts have the habit of attracting the extroverts and this one was no exception with a number of Freddie Mercury / Queen "lookalikes" in the audience including a couple in drag from the video to "I Want To Break Free". During this song Gary invited them onto the stage and like true troopers they played the part well strutting around the stage complete with toy hoover.

Gary certainly has lost none of the charisma that saw him won Stars In Their Eyes receiving the all time record number of votes. In fact the only thing he visibably lost on Friday night was sweat, which he lost by the bucket loads. But it was the audience that was Under Pressure, could we keep up with the frantic pace of such a high energy performer, the answer yes we did and nobody bit the dust!

A superb evening and whether you are a total fan of Queen music or just the odd hit next time Gary Mullen & The Works are at a venue near you go along and enjoy "One Night Of Queen".

If you were at this concert or any other on the current tour please feel free to submit your own comments.
Posted by Unknown at 04:28