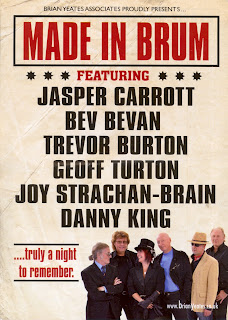 MADE IN BRUM THEATRE SEVERN SHREWSBURY SUNDAY 5th MAY 2013

As the lights dimmed Bev Bevan took to the stage to welcome everyone before introducing the show's host Jasper Carrott who gave an excellent spot of stand up showing why he is still at the top of his game after all these years.

Introducing each member  of the band as they took to the stage individually - Tony Kelsey on Lead guitar & musical director for the show, Abbie Brent on keyboards, Phil Tree on bass guitar and the master of the band Bev Bevan on drums.

After the band played a 60s music medley overture - Duane Eddy, Shadows, Beatles, Hendix, Stevie Winwood, Black Sabbath, and Led Zepplin to name part of the medley; Jasper introduced Phil Tree who performed the Spencer Davis classic - Gimme Some Lovin', before taking to the stage was the first of the show's guests - Trevor Burton the former lead guitarist with The Move who rocked the house with Eddie Cochran's "Something Else" which he announced was also the title of a Move EP recorded live at The Marquee, this was followed by The Move's "I Can Hear The Grass Grow".

Next guess was Birmingham's first ever pop star Danny King. A look at the Brumbeat website will confirm the statement showing Danny as the leader of many different bands. Opening his spot with Cliff's "Move It" he then changed tempo with Buddy Holly's "True Love Ways".

Next Jasper introduced former member of The Rockin' Berries and a recording star in his own right - Geoff Turton, who with Trevor Burton picking up his guitar gave a superb rendition of The Everly's "Claudette" followed by The Fortunes' "You've Got Your Troubles" and the Big O's "Pretty Woman" which had the audience well and truly clapping along.

Adding a touch of glamour to centre stage, Jasper introduced Joy Strachan-Bain of Quill. With an excellent stage presence she performed Tina Turner's "Nutbush City Limits" before changing the mood to a Dusty Springfield number which she dedicated to absent friends.

The second half began the same as the first with a stand up routine from Jasper, followed by the band's version of Elvis' "Freight Train" before Geoff & Joy take to the stage with "You've Lost That Lovin' Feeling" with excellent harmonies from Phil and Tony. Next came The Shirelles' "Will You Still Love Me Tomorrow" and PJ Proby's "Hold Me" with Joy performing The Moody Blues classic "Nights In White Satin".

Taking us back to his days of working the folk music clubs, Jasper led the ensemble in Steeleye Span's "All Around My Hat". Danny King then returns to the stage with Elvis' "Surrender" and The Drifters' "Save The Last Dance" before going into a poignant part that whilst singing "My Prayer" the screens played tribute to a number of Birmingham musicians that have recently passed away.

Back on stage Trevor Burton rocked it up again with "Drift Away" and then his tribute to Jimi Hendrix "Hey Joe" which showed off his excellent guitar playing and using a wah wah pedal to great effect.

The entire cast then closed the show with ELO's "Don't Bring Me Down" before returning for an encore - the Birmingham anthem - The Move's "Blackberry Way" which certainly had the crowd joining in and leaving the theatre in good spirits.

Taking their final bows each member lined up holding hands, more like what one expects to see at the end of a variety show or pantomime and certainly a far cry from the days when Bev and Trevor along with the rest of The Move would leave their mark in hotel rooms etc.

What I liked about this show was the great use of photographic stills and cine film clips on back screens, depicting images of the cast members career, scenes of Birmingham and images of the different artistes featured in the show.

However,I have several dissapointments - one would have thought Geoff would have sung a Rockin' Berries hit; the stars would like so many others would meet with the audience afterwards; but more so I feel that with the great number of hit songs to come from Birmingham there was no need to have featured American acts, that way the entire show, not just the musicians, and film clips would have been Made In Brum!

If you were at this show or any other on the tour please feel free to add your own comments!
Posted by Unknown at 11:37