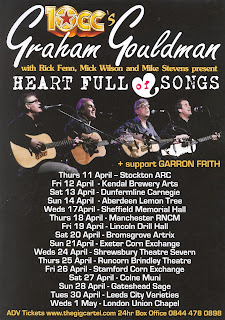 Opening the show was Garron Frith who accompanied himself on acoustic guitar and harmonica, while he sang a number of his own compositions, each one introduced by how they subject came about.With a nice style of informal delivery each song was introduced with a wit that warmed the audience to him. Lines such as "This song is the soundtrack for a film yet to be made".

One song that stood out for me was one where Garron played the harmonica and stamped his foot to give a beat and sang. No sooner had he began his spot than it was over and time for the last song. On plugging his CDs which he would sign in the interval he told how during the afternoon he was walking along the river and saw a man with a black bag which he was about to throw in. Noticing that the bag was moving Garron enquired as to his contents. Puppies the man replied I cannot afford their injections. With the audiences hanging on every word of this tale, Garron informed them that he had struck a deal with the man and that the proceeds of his Cd sales would be for the puppies. The things acts will say or do to sell merchandise.

To open the main show Graham Gouldman took the stage alone and with his acoustic guitar sang "Pamela Pamela" which he had written for Wayne Fontana back in the mid 1960s. Bringing on former 10CC coleague of 37 years, Rick Fein, the two of them performed The Yardbirds' hit "Heartful of Soul". Time to bring on the other two musicians - Mick Wilson and Mike Stevens and into 10CC's "Good Morning Judge" then "No Milk Today" by Hermans' Hermits. This was a different way to start a show and one that really worked for me.

More tracks followed from Graham's solo album including the up tempo "Halls of Rock n Roll", the country flavoured "Dancing Days" featuring Fein on slide guitar. More well known numbers featured were The Hollies' "Bus Stop" and "Look Through Any Window", 10CC's "I'm Not In Love" and "Things We Do For Love" before it was time for the final song The Yardbirds' "For Your Love".

Returning to the stage for an encore all four assembled around a single microphone to give an accapella version of 10CC's first hit record "Donna" before returning to their instruments to close the show with another hit from the 10CC "Dreadlock Holiday".

The entire set was an acoustic one, which made a pleasant change to hear such great songs performed without a driving sound.

Although the evening was one of Graham Gouldman compositions his song catalogue could keep us entertained for several nights. For details of all his songs, the tour and other dates www.grahamgouldman.info

IF YOU WERE AT THIS SHOW OR ANY OTHER ON THE TOUR PLEASE FEEL FREE TO ADD YOUR OWN COMMENTS!
Posted by Unknown at 02:23