THAT'LL BE THE DAY 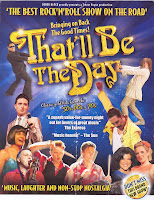 Having seen this production several times, each time I go I look forward to it with great expectations. When I go out I don't want to be sung at but entertained and that is certainly what this show does - ENTERTAIN!

From the moment Trevor Payne walked on to the stage to get the crowd involved before curtain up till the final curtain comes down this show like its predecessors delivers an entertaining, fast moving, musical tribute to the three decades of the 50s, 60s & 70s.

The beauty of this show is it is suitable for most of the family and by involving mixed generations will ensure that the music from these decades will continue to live on.

Each tour the content of the show changes, new songs are added, some favourite pieces are kept in, the comedy is kept up to date with whatever is happening around us, in particular the horse meat scandal being covered this time around and extremely well received.

One item that really stood out was "Wipeout" featuring two drummers, an excellent feature!

A bucket collection was taken as patrons left the theatre in aid of the show's chosen charity and one that I have supported personally numerous times with events, merchandise sales etc -  Help For Heroes Well done, £140k raised so far!

TOUR DATES
Posted by Unknown at 01:49