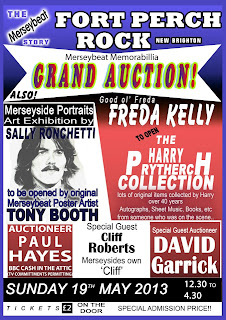 Having been there since the start, Harry Prytherch formerly drummer with the Remo 4, will be selling off his collection of memorabilia including autographs, sheet music, books, and much more.

Opening the auction will be Freda Kelly who was the secretary of the Beatles Fan Club back in the sixties.

Auctioneers will be Paul Hayes from TV's "Cash In The Attic" and recording star David Garrick "Dear Mrs Applebee".

There will also be an Art Exhibition of Merseyside Portraits

Live music will be provided by merseyside's very own Cliff - Cliff Roberts.