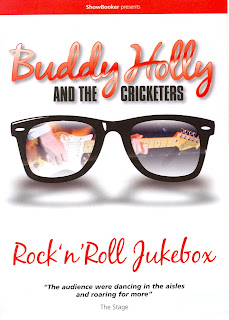 As the name of the band suggested this was to be a night of classic rock n roll. The mood was sent by endless rock n roll tracks being played as as the audience took to their seats and awaited for the show to commence.

As the houselights dimmed and the stage lit up the compere warmed up the audience with a bit of patter and announced that Shrewsbury had been voted the Rock n Roll Capital of the World, I phrase he uses every night of the tour but with the town changed, but it worked, it got the audience on his side. Fighting his way through the curtain he took up his place as the band's bass player.

Opening the set with some classic Holly tunes - "That'll Be The Day" "Rock Around With Ollie Vee" "It's So Easy" and the first song Buddy wrote "Down The Line". The show was billed as a Rock n Roll Jukebox and so followed numbers made famous by other stars - "Heartbreak Hotel" (Elvis), "Wake Up Little Susie" (Everly Brothers) this saw the vocals move from Buddy to the guitarist & Bass guitarist. Return to the Holly hits with "Peggy Sue" with which the audience were encouraged to click their fingers along with the band, this was followed by "Everyday" in which the drummer kept the beat not using his drum kit but by slapping his thighs, "Blue Days Black Nights" followed.

The next series of hits came as part of the "Sun" sessions paying homage to Sam Phillips' legendary recording studios. Firstly rhythmn guitarist gave us Carl Perkins' "Blue Suede Shoes" followed by Johnny Cash's "Got Rhythmn" sung by the bass player before moving to the keyboard player doing "Blue Moon Of Kentucky" and the drummer singing Jerry Lee Lewis' "Whole Lotta Shakin'". "Doesn't Matter Anymore" took us back to the Holly hit catalogue followed by "Brown Eyed Handsome Man" (penned by Chuck Berry but a hit for Buddy) "Heartbeat" "Not Fade Away" and closing the first half "Peggy Sue" which saw the drummer play standing up throughout the song and the bass player stand on his double bass on one leg.

The second half saw the band minus Buddy open with "Come On Everybody" with Buddy rejoining the stage on "Maybe Baby". Asking if anyone in the audience was celebrating an anniversary, which one couple was plus it was the man's birthday the next song was dedicated to them "Peggy Sue Got Married" before moving onto the Roy Orbison classic "Pretty Woman".

Taking the radio mic the bass player to control getting people to gaze into each others eyes, put an arm around each other then asking for couples that were in love to stand up as the band went into their "love section" with "Raining In My Heart" and "True Love Ways" during which the bass player had left the stage made his way into the stalls to gee up more people to be upstanding and swaying along before doing the same moving amongst those on the balcony.

Time for the drummer to take the lead vocal again this time on the Beatles' "Saw Her Standing There" which got members of the audience dancing on the feet. More classics followed - "No Particular Place To Go" with Buddy having a go at Chuck Berry's infamous Duck Walk, "La Bamba" and "Twist n Shout" closing the set with Holly favourites "Oh Boy" and "Think It Over".

Returning for an encore with a medley of numbers including "Rave On" "Tutti Frutti" "At The Hop" "Great Balls Of Fire" ending with the timeless classic "Johnny Be Goode" which featured intrumental solos from each of the musicians with Buddy playing the guitar behind his kneck.

If I am honest he is not the best and certainly not the worst Buddy Holly that I have seen, but he is full of confidence and along with the band certainly knows how to work an audience. AC
Posted by Unknown at 03:17