DOMINOES at the FORT 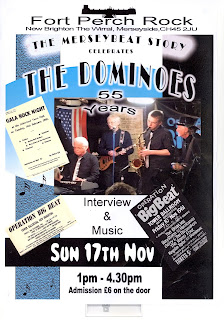 
The afternoon began with the usual music quiz and a raffle was held in aid of the Cae Dai Trust.

Founder member of the group Sam Hardy was interviewed by Mersey Beat historian Dave "the rave" along with his infamous phone, and the assembled crowd listened to how the band came about, tales of playing both the "Star Club" and "Top Ten Club" in Hamburg, how slimming pills "Pirellies" were used as a stimulant to keep the bands going, how the band along with another evolved into being King Size Taylor & The Dominoes, and what happened to the different band members over the years. As always Dave added that something extra to the interview by playing some Domino tracks that he had discovered and downloaded them onto his phone.

As the interview came to a close Dave surprised the band by presenting them with a signed certificate inducting them into the Mersey Beat Story Hall of Fame.

The currently line up of the band features Keyboards, Drums, Bass Guitar, Lead Guitar and Saxaphone and all members have been Dominoes for a great number of years, the youngest being Gaz Gaskell (Gaz & The Groovers) on saxaphone. The lead vocals throughout the set were spread out among the group which is always good to see.

The band had a new CD on sale during the afternoon, which were snapped up.

Whilst the Dominoes didn't have any success in the music charts they were extremely popular in Germany and rated as one of the top groups in Liverpool. They still visit Germany to play gigs with former front man Ted "Kingsize" Taylor who lives out there. The band are also mentioned in the Chuck Berry biography "Long Distance Information" as they used to support Chuck on his UK tours.

The next Mersey Beat Story session will take place on Sunday 16th December which will feature a jam session by a number of mersey beat musicians, promises to be another great afternoon at The Fort.