PHOENIX OUT OF ASHES 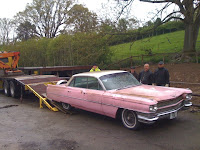 A recent visit to North Wales found me searching for a 1950s Museum that I had heard about some few years ago but never come across. So I made it a mission to see it, however, asking locals and information centres I was informed it had been burnt down. But what no one bothered to tell me was that it was still in operation.

The museum can be found in the beautiful setting of a working farm in the Vale of Clwyd, 1 mile outside of Denbigh in North Wales, on the Nantglyn Road or for those directed by satnavs postcode LL16 4SU.

"T he 50’s museum  in Denbigh is one of those little hidden gems you will hear talked about a fair bit!  Having seen fire’s destroy one of the main buildings last year due to an arson attack, like a Phoenix from the Ashes Cae Dai 50’s museum is hoped to be back to its full glory again.  You are able able to enjoy looking around such vehicles as the original  lorry that was used in the real ‘Great Train Robbery’ also featured at the museum is the car that belonged to ‘Christine Keeler’ the 50’s & 60’s model that sparked the whole ‘Profumo’ scandal that rocked the then conservative government.  Plus many more treasures from the 50’s era. So whether you’re a 50’s enthusiast or just somebody who appreciates the past, do not overlook this amazing little museum."

Despite the fire which claimed many classic vehicles, artefacts and memorabilia there is still plenty to see in the way of 50s /60s related items - pop memorabilia, furniture, household appliances, books, magazines and vehicles.

See examples of sporting equipment including a punch ball owned by John Lennon. 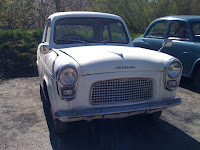 Since the fire an extensive rebuild programme has been undertaken along with a continuous fundraising campaign to finance the building to house a new museum, community hall and so forth. Anyone who has any artefacts that they would like to donate to the museum should contact them direct on 01745 817004 or 812107. Financial donations should be sent to 50s Museum Dept BW, Cae Dai, Denbigh North Wales LL16 4SU cheques payable to The Cae Dai Trust. Please make a donation however large or small and help return the museum to its former glory.

As the existence of the museum is hardly known in the big wide world, Beats Working and the people involved in this webpage have made it their mission to inform as many people as possible about it. Check out the museum's page on Facebook - Cae Dai Trust. However, you decide to support the museum, facebook message, donation, visit please tell them that you heard of them from Beats Working.  AC
Posted by Unknown at 02:30