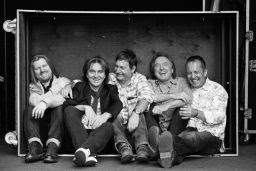 Five world-class musicians, singers and songwriters who, after years of touring and recording with some of the most iconic bands in the world, bring you a great new show highlighting some of the best British Rock and Pop music of a generation.

Featuring special guest Peter Howarth–lead singer with The Hollies, this band of current and former musicians with the Moody Blues, The Hollies, Cliff Richard, The Manfreds and The War of the Worlds bring you hit after hit, with some of the greatest songs that formed the soundtrack to our lives.

Whether it’s the vastness of the O2 Arena, the grandeur of The Royal Albert Hall, the eminence of The Hollywood Bowl, or the intimacy of Ronnie Scott’s, these guys have been there, done that, and they bring that world of experience to their show.

Having played and recorded with THE MOODY BLUES, THE HOLLIES, CLIFF RICHARD, THE MANFREDS, THE WAR of the WORLDS, THE WHO, ERIC CLAPTON, DIONNE WARWICK, DAVID ESSEX, LIONEL RITCHIE, MARK KNOPFLER, SHEENA EASTON, ANNIE LENNOX, THE NOTTING HILLBILLIES and literally dozens more, this isn’t just a covers band - these guys ARE the band that helped make these high-profile acts sound so good live and on record.........

If you have been to see any of the shows feel free to add your comments.
Posted by Unknown at 02:04