ROCK AROUND THE SIXTIES 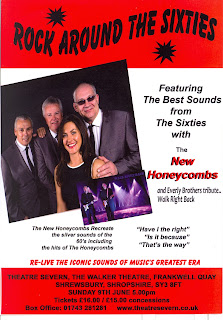 A rather small audience for this show which is not what it deserved, but an early start at 5pm on a rather hot day might be a contributary factor.


Opening act was "Walk Right Back" a tribute to the Everly Brothers which featured a fair number of classic Don & Phil tracks including - Walk Right Back, Till I Kissed You, Cathy's Clown, Bye Bye Love. So Sad, Wake Up Little Susie,  When Will I Be Loved, Dream, Claudette, and Let It Be Me. But what I didn't get was the inclusion of two Buddy Holly numbers, simply because the Everly's toured with Buddy. There is sufficient numbers in the Everly's song book not to have to do this.

Saying that, the two men concerned gave a polished performance, were smartly dressed with good patter with the audience but a band would have been better than using backing tracks, and if financial constraints mean that tracks have to be used then in a theatre enviroment get someone off stage to operate the tracks. For me this cheapened what otherwise was a brilliant and polished act.

Following the interval the main act of the show - The New Honeycombs, took to the stage. This is a well seasoned four piece with years of experience between them and keeping in pure Honeycombs tradition including a female member although not on drums, which was the main trademark of the original group.

Apart from The Honeycombs hits - "Have I The Right" "Is It Because" and "That's The Way" the band performed songs from - Billie Davie/ PP Arnold (Agelof the Morning), Beatles (Can't Buy Me Love, Twist & Shout), Couldn't Live Without Your Love (Petula Clark), Dusty Springfield (Only Want To Be With You), Bobby Vee (Take Good Care of My Baby), Mamas & Papas (California Dreamin'), Smokie (Living Next Door To Alice), Del Shannon (Runaway), Neil Sedaka (Breaking Up Is Hard To Do), The Seekers (Find Another You), The Searchers (Walk In The Room, Needles & Pins, Don't Throw Your Love Away), Spencer Davis (Gimme Some Lovin'), Tamla Motown (Rescue Me, Baby Love, Stop In Name Of Love, Dancing In The Street).

The instrumentation of this band was back to basics as it was in the sixties, guitar, bass, drums and vocal, but adding that extra something was the numbers played on the 12 string guitar.

Included in the set was a number written by guitarist John Quinn entitled "Girl From No6" a great 60s feel to this song probable because that's when John wrote it.

What made the show mostly enjoyable for me was the inclusion of a number of songs not normally performed on sixties shows.

If this show or simply the New Honeycombs is at a venue near you then take a visit I am sure you won't be dissapointed.

If you visited this show or any other on the tour please feel Free to add your comments.
Posted by Unknown at 04:36