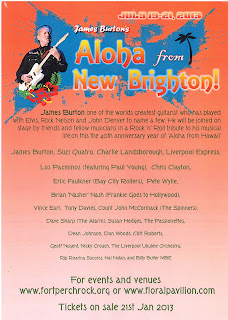 FRIDAY NIGHT:
Taking to the stage compere Hal Nolan warmed the audience up with a short stand up spot before telling us that we were in for a night of rock n roll and proceeded to introduce the first act of the evening - Dave Sharp of The Alarm.

Getting our night of rock n roll off to a start he began his set with the Gospel singalong "I Saw The Light" which he then followed with four more songs, not known to me but well received by the audience.

Next up was former Bay City Roller Eric Faulkner who mixed some oringinal and folk numbers with covers of the Rollers hits - Bye Bye Baby, and Shang alang. I have enjoyed Eric several times before in much smaller and intimate surroundings but felt sitting down throughout his spot he and his music was lost and would have been better with a band to fill the sound and auditorium.

Staying on stage Eric was then joined by Tony Davis and John McCormack, both of The Spinners with a set that featured Tony swapping instruments from Banjo to Penny Whistle as the set comprised of more traditional folk songs and sea shanties from The Spinners TV days, finishing with far too many choruses of Maggie May which did have the audience singing along.

Just when one began to ask, what happened to our night of Rock n Roll, 70s hit makers Liverpool Express took to the stage and immediately woke the audience up giving a much needed lift to the proceedings. A great set from Billy Kingsley and the band which included - "No Matter What", the self penned "China Town" "Out Of Time", "I Saw Her Standing There" with great lead guitar and keyboard solos, and not forgetting their own hit "Everyman Must Have A Dream"  and "You Are My Love". Also featured was a song that Billy informed us he recorded as a teenager with the duo The Merseys "Sorrow". A great way to add any concert but this was only the end of the first half.

The second half began in true Elvis mode with the 2001 Space Oddysey theme. A 7 piece band made up of accomplished Merseyside musicians took to the stage for a set that featured blind keyboard player Susan Hedges, vocal backing duo The Passionettes and Elvis tribute act Chris Clayton, and the weekend's star guest - guitar supremo James Burton..

It was straight into the Aloha From Hawaii set list with - "CC Rider", "Burning Love", "Something In The Way She Moves" which slowed down the tempo and showed off James' guitar playing, then came "Gave Me A Mountain" "My Way" and Hank Williams' "So Lonesome I Could Die" which again featured some excellent guitar work by James. The Passionettes who had been working extremely hard throughout the set with excellent backing vocals and choreography, took the to the front of stage with "Fever" sharing the lead vocal with finger snapping accompliment from the audience as well as the band sound.

Following the introduction of band members Chris Clayton gave superb renditions of "Suspicious Minds", "Whole Lotta Shakin", and "American Trilogy" which really showed off his powerful voice, and then "Can't Help falling In Love" before leaving the stage in the more than capable hands of Susan Hedges with her versions of Emmylou Harris' "Sweet Dreams" from the Elite Hotel album, Merle Haggards "Tonight The Bottle Let Me Down" and John Denver's "Country Roads", all artistes that James had worked with over the years.

Next on stage was the night's main guest star - Suzi Quatro who asked the band and audience if they were ready to "Kick Ass" and with her driving bass sound gave a solid rock n roll set featuring "Rock n Roll Music" "Johnny Be Goode" "All Shook Up" "Slow Down" "Sweet Little Rock n Roller" and "Sweet Nothings".

With just two guitars playing James then gave us an instrumental rendition of "Somewhere Over The Rainbow" and then Chris Clayton returned to the stage with a "Early Morning Rain" in tribute to Duncan Darroch (promoter's brother) who sadly passed away only a week or so prior. Apart from Suzi Q, Dave Sharp and Eric Faulkner all the other artistes that had appeared returned to the stage for the finale and "The Wonder Of You".

Opening act was local song writer Dean Johnson who I have again enjoyed several times in the past, but felt that he took too long introducing himself and the song he chose was too slow for an opening act. The opening act/song needs to hit the audience between the eyes to tell them the show has begun and grab their attention. Then it was time for compere Billy Butler to introduce the Liverpool Ukele Orchestra. For me this act set the scene of what the whole weekend was about - 40th anniversary of Elvis Aloha From Hawaii concert. Dressed in Hawaiin shirts, floral garlands the 21 piece orchestra gave us a great medley of Elvis numbers including - "That's Alright Mama" "All Shook Up" "Good Luck Charm" "Hound Dog" "Teddy Bear" "Blue Suede Shoes" and "Blue Moon Of Kentucky" with different members taking the lead vocals.

Next up was the house band from the night before and again featuring Susan Hedges, and The Passionettes, and James Burton with Billy Butler introducing a veteran of Liverpool rock n roll turned actor Vince Earl who continued like the true professional that he is, with "When My Little Girl Is Smiling" although there was a problem with his microphone. He then introduced another Merseyside music veteran Geof Nugent of The Undertakers who gave us a version of the group's biggest hit "Just A Little Bit", then continuing the old rockers set Cliff Roberts did "Move It" and Nicky Crouch (The Mojos) "Everyday" before Vince returned to the stage with "Get Ready" and "Proud Mary".

Paying tribute to Rick Nelson another great name that James Burton had worked alongside, Don Woods with his usual charm and style gave us "Fools Rush In" "Poor Little Fool" "Lonesome Town" and "Hello Mary Lou" before Roy Orbison's "Pretty Woman". Again Orbison being another to use the talents of James Burton in recordings and concerts.

Taking the stage next were more recent Merseyside musicians that the previous ones - Peter Wylie, Brian "Nasher" Nash (of Frankie Goes To Hollywood) who got into the swing of the Aloha From Hawaii mode with "CC Rider" and "Suspicious Minds".

Nash then solo did the fast tempo "Burning Love" before changing tempo with "Something In The Way She Moves". The Passionettes then took to centre stage to recreate Sweet Inspirations who opened shows for Elvis Presley. Wylie then sang his self penned number "A Heart As Big As Liverpool" before Nash gave a great version of "Can't Help Falling In Love" and from his Franke Goes To Hollywood days "The Power Of Love". Wylie then closed the first half with "The Wonder Of You" which had the audience joining in singing, swaying before leaving for much earned liquid refreshment.

The second half was delayed slightly due to technical problems but was soon under control with the night's special guest Charlie Landsborough and his band giving an excellent set of the many songs written and recorded by Charlie over the years including "I Will Love You All My Life" "What Colour Is The Wind" "My Forever Friend" and "Shine A Light" all interspersed with Charlie's own imitable sense of humour.

SUNDAY AFTERNOON:
An extra bonus for the weekend was sitting in the cinema watching the film of the Aloha From Hawaii Concert, after which James Burton got up to say a few words.

Welcoming everyone to as he put it, the third half of the James Burton Aloha From New Brighton Weekend compere Ala Cra introduced the opening act "Rip Roaring Success"  who played a 30 minute set of western swing music with just a guitar, double bass and fiddle, but judging by the reaction of the audience they lived up to their name. Following a brief interval the compere managed to get his tongue around the night's headlining act Los Paciminos, who took to the stage with their set of Tex Mex style music which again was well received by the audience. Mind you with former 80s hearthrob Paul Young as their frontman its no wonder the ladies were well pleased. For their second set after the initial first couple of numbers the band welcomed onto the stage James Burton and between them they partied with some great rock n roll tunes.

Personally I found the theatre concerts too long due to overcasting, but then others will say that they had more than their monies worth. However, I thoroughly enjoyed the Mersey Beat Legends bit on the Saturday night, pity they were reduced to only doing one number each. I am sure that the format of using a houseband and inviting a number of Mersey Beat names to come along and guest would make a great show to tour venues in and around the Liverpool, Wirral & North Wales area.


Organisers Dougie & Sasha Darroch would like to thank all who attended and assisted with the James Burton's Aloha from New Brighton weekend.  More than 2,000 people attended this privately funded weekend and it proved to be a great success, we look forward to next year when it will be bigger and better.

If you were at any of the concerts over the weekend please feel free to add your own comments!
Posted by Unknown at 13:06