Richest Songs in the World

The BBC 4 Documentary: “The Richest Songs in the World” has been scheduled to broadcast on:

It will feature James Burton, which was filmed during July on his last visit to Fort Perch Rock, New Brighton, Wirral.
Posted by Unknown at 02:47 No comments:

From the aged of 16 Tony Bolland kept diaries and photographs of my everyday life working in a musical instrument shop in the suburbs of Liverpool called 'Plug Inn' owned by Frank Hessy. Plug Inn has hundreds of photographs and personal stories from musicians who were part of the music scenes in Liverpool and on Merseyside throughout the mid to late 60's and the 1970's plus the venues and clubs where the bands played.

Plug Inn volume two continues with many more band stories some of who signed major deals and had success around the World with an insight to being a working musician on the Road and many of the Merseybeat bands reformed with new up and coming musicians and played corporate gigs and the Cabaret scene.

Hessys the Iconic shop where the Beatles bought their first instruments from was situated in Liverpool town centre around the corner from the Cavern and many of the bands that played lunchtime sessions frequented the Iconic shop the book 'Hessys' the shop that launched a thousand bands and the Beatles tells the story of how it began in Manchester Street in the 1930's by the mouth of the Mersey Tunnel right through the Merseybeat days of the 1960's until the shop closed down in 1995 - the customers and staff also recall their experiences visiting and working in the shop, there are lots of photographs never before published including a photograph of John Lennon who was in the same class and school as the managing director of Hessys - Bernard Michaelson.
www.pluginnbook.co.uk
Posted by Unknown at 02:33 No comments:

CHRISTMAS AT THE FORT 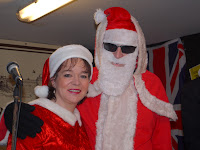 Hosted by HARRY PRYTHERCH (Drummer with The Remo 4), Guest appearance by Santa and Mrs Christmas

PAUL CROSS; Youngest drummer to have played The Cavern club, recently returned from seasons in Switzerland and Ibiza.

GEOFF NUGENT: Lead singer with hit recording stars "The Undertakers". A great showman who's set included - "Sweet Little 16" "Matchbox" "I Can't Stop Loving You" "C'est La Vie" and ending the afternoon in Christmas spirit with "White Christmas" and "I Saw Mommy Kissing Santa Claus".
﻿
﻿
DAVE WILLIAMS: Guitarist with "Group 1" and "The Jaywalkers". Recently featured in the BBC documentary "Love Me Do". Great festive offering of Slade's "Merry Christmas Everybody".

NICKY CROUCH: "The Mojos" gave us his renditions of "Kansas City" and "Bye Bye Johnny"


TERRY FISHER: The Del Renas / The Motifs. Great versions of "Ready Willing & Able" and "Laydown Sally" among others.

Tommy Steele obviously more than happy to see his old pal Jess at the opening of his hit Christmas show Scrooge at The London Palladium. They have been firm friends since both pioneering British Rock & Roll as teen idols in the late fifties.

Rula Lenska, the flame haired actress and star of numerous television and screen roles who was once married to television star Dennis Waterman was escorted by Jess Conrad to the autumn event at Buckingham Palace in aid of the Not Forgotten charity which provides help and support to the veterans of the Second World War. The glamorous pair were there by Royal invitation.

Jess was delighted to be invited to Marty Wilde`s Rock And Roll Party tour, a real extravaganza which Marty himself starred in and directed and which included Eden Kane (Well I Ask Ya, Boys Cry, Forget Me Not) now a resident of Beverly Hills where he lives with his lovely wife Charlene who by the way just happens to be the sister of actress Stephanie Powers, and Joe Meek protege Mike Berry (Tribute To Buddy Holly, The Sunshine Of Your Smile) ."One of the best shows of its kind I`ve ever seen" says Jess.

X-Factor`s Ella Henderson pictured here with her sister Rose and sixties icon Jess Conrad who was asked to ecort them to the opening of the jukebox musical Dreamboats And Petticoats which is enjoying a return to London`s West End at the Wyndhams Theatre. Why would a young pop singer be accompanied by a star of an entirely different generation you may well ask? It appears the Miss Henderson is a keen enthusiast of the music and style of that great decade. And who knows more about those wonderful times than Jess?

Check out my website for Concerts/Shows and Media Information http://www.jessconrad.com
See  on YOU TUBE