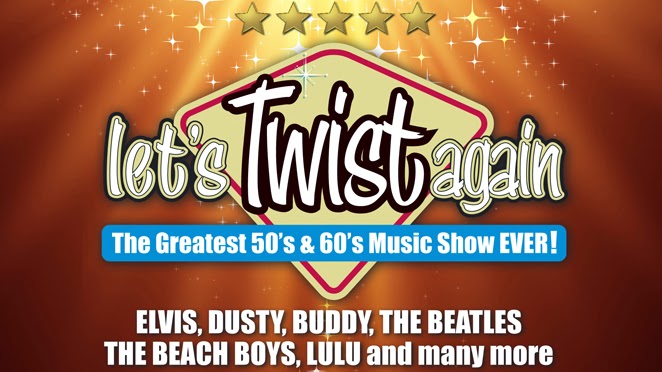 
Set in an American Diner The Twist is a great 1950s 60s theme show featuring a great diner looking set, a 7 piece houseband and an entertainment bill that featured Elvis Presley, Buddy Holly, Connie Francis, Petula Clark, Sandie Shaw, Lulu, and Dusty Springfield, plus a compere who's jokes believe it or not are older than mine. West End star Suzi Jary played all the female roles with costume & wig changes and recreated the voice of those she was portraying, with her husband as Buddy Holly as well as performing as himself, and Danny Fisher played Elvis all backed by a smartly dressed group of proficient musicians.
If you've not seen this lively, fun filled show yet then check it out at a venue near you or hopefully wait till next year when it will hopefully return to Shrewsbury's Theatre Severn, I would think that the almost capacity audience will convince the theatre management to rebook the show.
Posted by Unknown at 15:45 No comments: 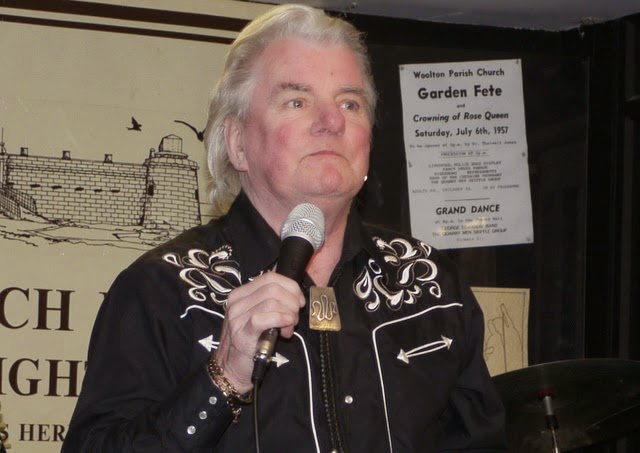 Sadly Geoff Nugent of The Undertakers and a stalwart of the Mersey Beat scene passed away after suffing a heart attack on Sunday 11th October 2014. RIP Geoff
Posted by Unknown at 16:13 No comments:

The title of the show really does sum it up. Although Truly Sensational would be more like it.

First up was the fabulous Ivy League. Dave, John & Mike never fail to deliver a first class show that features top musicianships, great vocals and their trade mark comedy. Next up was Union Gap UK who having done their own set backed the grand master, the man with the glove - Dave Berry. Opening the second half was Alan Lovell's Swinging Blue Jeans with Hermans Hermits topping the bill, with an encore featuring a full ensemble bring the show to a close. Former member of Freddie & the Dreamers, Alan Mosca did a fine job as compere.

The sell out audience at Theatre Severn really showed their appreciation and I am sure a Full House will greet the show when it returns next year.
Posted by Unknown at 14:23 No comments:

Having had an extremely successful career spanning over fourty years, Joan Armatrading decided for her final tour to do a number of solo performances.

The Theatre Severn audience were treated to a mix of old favourites and some new compositions by the 62 year old singer who has been successful in a number of musical genres - pop, blues, reggae, jazz and folk.

Enjoyed a very brilliant show at Theatre Severn Shrewsbury last Saturday - The Billy Fury Years featuring probably the best Billy Fury tribute singer Michael King. What I particularly liked about Michael is that he openly said that he didn't think that he was Billy but paying homage to his idol and one of Britain's most underrated singers.

Alan Crowe
Posted by Unknown at 15:03 No comments:

GERRY ACROSS THE MERSEY THEATRE SEVERN 30th May 2014.


Not a big crowd at Theatre Severn Shrewsbury tonight, despite an excellent band. The show billed as Gerry Cross The Mersey features legendary Liverpool hit makers Gerry & The Pacemakers. An excellent showman fronting four superb musicians. In between songs Gerry treated the audience to his scouse humour which encapsulated the audience.It seems an age since I first worked with Gerry at Welshpool Town Hall in 1983, but have seen him many times since. He hasn't lost that personality that has endured audiences since the early 1960s. His voice was still there and shone in particular at the end with the anthem that links him with football teams around the country - "You'll Never Walk Alone"
Alan Crowe
Posted by Unknown at 15:00 No comments: