THAT'LL BE THE DAY

In all its 28 years of being on the road the That'll Be The Day Show has been one of a formidable standard and it has been my privilege to see a great number of them; but this new show I feel has really raised the bar.

It has to be the ultimate 50s 60s 70s nostalgia show and long may it continue.

Also included were two great medleys of Drifters and Abba numbers, and an extremely moving rendition of "American Trilogy".

Adding that extra something to the show was the excellent use of back projection on a large screen that complimented some of the scenes by providing a visual backdrop or acting as a link to items of the show by being used to show adverts, clips to link to the next item and so forth.

This show has it all - non stop hits of yesteryear, fantastic costumes, excellent mucianship, fully choreographed routines and some side splitting comedy.

What I would like to see is for venues around the UK reducing ticket prices to youngsters under the age of 18 years so they can be encouraged to go along and see the show and enjoy such memorable music.
ALAN CROWE.

If you have seen the That'll Be The Day Show on its current tour and would like to add your comments please feel free to add them!

This was an excellent tribute show of two of the greatest acts of the 1970s - Abba & the Bee Gees.

Bootleg Abba recreated the sound of Abba playing the majority of the Swedish super group's greatest hits although they left out my favourites " Waterloo" and "Thank You For The Music". A good driving sound of keyboard, guitar and drums. However, as Abba shows go there was no costume changes which I am sure could have been included. But the one thing that really gets to me with Abba shows is when they try to put on Swedish accents, the two girls on this occasion sounded more Irish than Swedish.

The second half saw Bee Gees Fever portray the brother Gibb recreating with great accuracy all those singalong and disco numbers with Barry strutting his stuff with great gusto and stamina.

This was an excellent feelgood factor show that got everyone singing, clapping and dancing from start to finish. Well worth going to see when in your area!

If you have seen this show then please feel free to add your own comments!

A BIG THANK YOU , TO EVERYONE WHO BRAVED THE APPALLING WEATHER LAST SUNDAY AT FORT PERCH ROCK. FROM 1PM UNTIL CLOSING IT WAS A WONDER FULL AFTERNOON. GREAT MUSIC --LOADS of LAUGHS( mostly at my expense ah-ah ) GREAT QUIZ (how the hell did anybody get YUE SUKAMATO) GREAT RAFFLE--DAVIDS TRIBUTE--HALL OF FAME --SNOOTY FOX--60s CLOTHES--POETS--BEATLES PLAY -- BUT SINCERLEY A ROOM FULL OF WONDERFULL FRIENDLY CARING PEOPLE - ENJOYING THE GREAT ATMOSPHERE. THANK YOU SO MUCH EVERYONE , MAY THE FORT BE WITH YOU .. HARRY--DORIS Prytherech 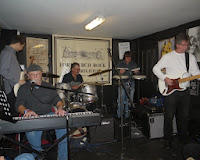 
Joe Flannery talking about the Letter her received from President Obama thanking him for the copy of his new book he signed and gave the president. 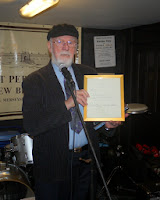 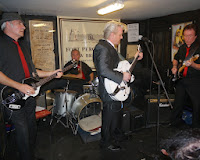 The second band were mainly from Manchester called TKC (The Knight Crew) but they only ever call themselves TKC,  excellent band made up of John Elliot(lead guitar), arty Davies (local drummer) Mark Knight (lead singer) and Richie Taylor (bass). 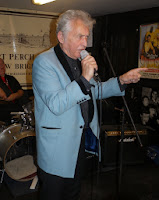 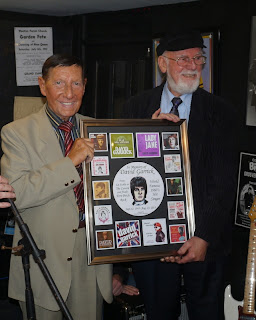 Tony Booth and Joe Flannery are holding up the "Collage" to celebrate the life of David Garrick who passed away three weeks ago, Joe was quite emotional when speaking of David. 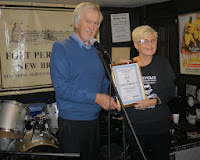 Dave Williams presented an induction plaque to Ian of Ian & the Zodiacs widow Betty into the fort merseybeat hall of fame?