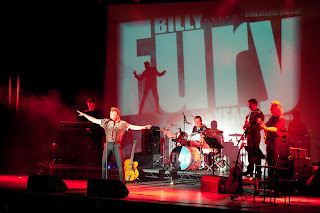 From the outset this was not going to be just a tribute act but a show dedicated to keeping the memory of Billy Fury alive.

As the curtain raised the back screen showed a film clip of early Liverpool, setting the scene for Billy's early life. Then comes the year 1959 and the start of Billy's musical career.

The band, fronted by Michael King go into a selection of Billy's songs including - That's Love (from Sound of Fury album), Wondrous Place, Just Because, Margo, plus others before Michael left the stage with the band going into Shakin' All Over.

Shindig from 1965 appears on the screen and Michael returns to the stage dressed in a gold lame suit and straight into "Lost Without You" followed by my personal Fury song apart from the hits - "Nothing Shakin' But The Leaves On The Trees" and then "If I Love You" which was also covered by Shakin' Stevens. Followed by "Find Another You" and "Fools Errand", then "Rip It Up" on which the bass player showed his showmanship by picking up his double-bass and playing it like a guitar, standing on it, and lying on it whilst playing. Time for Michael to live the stage leaving the band to play "Wipe Out".

The screen informs us it is now 1973 and with another change of stagewear Michael gives us "A Thousand Stars", "Once Upon A Dream", "Like I've Never Been Gone" Jackie DeShannon's "I Must Be Dreaming" before closing the first half with "A King For Tonight".

Opening the second half Michael is dressed identically to the image of Billy on the screen and gave superb covers of "Give Me Your Love" and "Last Night Was Made For Love". Then followed Chuck Berry's "Sweet Little 16", "My Baby Left Me" "Unchain My Heart" and "Will You Still Love Me Tomorrow" with lead guitarist on harmony.

Next up was the "Hippy Hippy Shake", "Run To My Loving Arms" and "I Will" along with others. Sat upon two stools Michael and the lead guitarist played an accoustic  "Help Us" in tribute to Billy's brother Albie (aka Jason Eddie) who passed away about 15 months ago.

"In Thoughts Of You" came next, followed by the last song that Billy had sung live which was in Northampton "Maybe Tomorrow" then another Chuck Berry classic "Johnny Be Goode" and so not to be out done by the bass players earlier antics the lead guitarist used the instrumental breaks to play his instrument behind his neck. 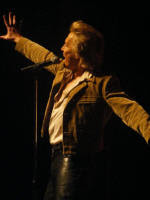 Then came a clip from 1983 with Alan Freeman introducing Billy on the TV show "Unforgettable". Again dressed identical to the screen image of Billy, Michael took us to Billy's highest chart position of No2 with "Jealousy". One new that the concert was coming to a close when Michael delivered "Devil Or Angel" and then "Forget Him" which was Billy's last ever record release.

With the entire audience on their feet swaying their arms the show closed with "Only Make Believe", bidding farewell to the audience Michael left the stage with the band going into a drum solo.

Of course no Billy Fury show is complete without the anthem - "Half Way To Paradise", with Michael returning to the stage, the audience were up on their feet and joining in. Sadly the concert was over all too quickly and it was time to go home, but not without stopping in the foyer to chat with Michael who posed with photos with fans, signed autographs and chatted with the assembled crowds.

One thing that I was really pleased to see is the branding of this show - the fliers, posters, bass drum skin, and slide on the screen were identical. It is nice to see acts are spending time enhancing the overall image of the show.

If you want to know more about the show, forthcoming dates etc click here!

If you were at this show or any of the others on the tour please feel free to add your own comments!
Posted by Unknown at 06:56