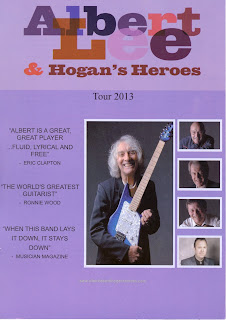 I first saw Alber Lee on a cold damp evening at an outside concert featuring Albert and James Burton at Fort Perch Rock, New Brighton in 2012. However, as he was only guesting I didn't get to really appreciate what a fine musician he really is.

Sunday's concert with his own band, Hogan's Heroes totally confirmed to me how talented this guy is. Not throughout the entire concert did I hear one song that I knew, and believe me I have heard a lot having been around the music industry for nearly forty years.

Comprising of numbers by themselves, unknown writers as well as the likes of the Everly Brothers, Gram Parsons, Carl Perkins, Glenn Cambell, Buddy Holly, and Johnny Burnette the concert was mainly country rock but with a touch of tex mex and western swing added for good measure.

There was plenty of lighand shade throughout the concert with up-tempo numbers followed by a nice melodic ballad with Albert swapping his guitar for piano before dooning his guitar again for some real rocky number.

When I go out I like to be entertained and entertain me these lads certainly did, expert musicians displaying their skills on drums, bass guitar, keyboards, and pedal steel, with the lead vocals shared between Albert, Gavin Povey on keyboards and Peter Baron on drums.

It is no wonder Albert has been dubbed "the world's greatest guitar player" and whether you are a novice or competent guitar player, a visit to an Albert Lee concert should be part of your rehearsal schedule. To sum up Albert's talent as a guitarist I must quote a comment made by a young lady which I overheard on leaving the theatre, "I cannot believe how incredibly nimble his fingers are for an old man", nimble! you should see how they work that guitar.

To catch a concert and for full details of Albert and the band visit http://www.albertleeandhogansheroes.com

If you were at this concert or any other featuring Albert Lee please feel free to add your own comments.
Posted by Unknown at 02:04