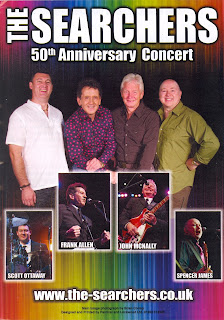 THE SEARCHERS at THEATRE SEVERN SHREWSBURY THURSDAY 30th MAY 2013


For whatever reason it has been a few years since I lost saw these guys. In fact it is at least 3 as new boy Scott on drums has been with them 3 years and he wasn't there the last time I saw them.

This show was part of their current 50th anniversary tour, and the years of experience shone through great tunes, hit records and some great patter from Frankie Allen along with the banter between him ang John McNally kept us entertained.

With about 28 songs in the show of which only a handful of other peoples hits, from the opening song - "Sweets For My Sweet" through to final song the show featured not only the group's UK hits but album & EP tracks and foreign hits like "Bumble Bee" an EP track in the UK but a single in Australia. Included were "Goodbye My Love", "Sugar & Spice", Needles & Pins", Love Potion No9", "Walk In The Room"and "Don't Throw Your Love Away".

A number of other peoples songs were covered during the night including - Roy Orbison's "Running Scared", The Byrds "Mr Tambourine Man", Bette Midler "The Rose", The Beatles "Twist & Shout", Gerry & The Pacemakers' "You'll Never Walk Alone", plus an up tempo version of Gary Puckett's "Young Girl".

Smartly attired in suits the guys looked good on stage and despite their advanced years both Frankie Allen and John McNally look as if they have still got a good few more years left to keep reminding us of the songs that have established them as one of the greatest beat groups that the UK has produced.

If you saw this show or any other on the tour please feel free to add your own comments!
Posted by Unknown at 02:29