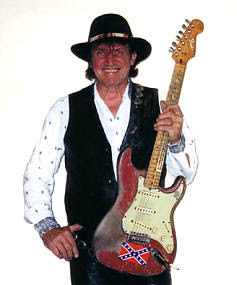 On Tuesday 16th February 2016  the funeral of  Chris Black one of the great  Rock and Roll Guitarist's was held, we said farewell  to much loved friend but not to his memory or his music.
As with everything in Chris's life his funeral was a huge event, as it should be for a man who was larger than life, a man who towered over Rock and Roll Music in the UK.
From the day he first picked an old guitar out of the rubble after a World War Two bombing raid Chris Black knew he would play  and love Rock and Roll  all his life.
He was influenced so he told me by the playing of Bill Doggett Scotty Moore, Bill Haley and later Duane Eddie. Influenced no doubt, but he developed  his own style and that style excited people for more than 50 years.
In a career that started with gigs down in Chilsehurst Caves in Kent and took Chris through his National Service to working in clubs and theatres throughout the UK and Europe Chris was always innovative.  He shared the stage with so many of  the names of the 50's and 60's  including Brian  Poole, Tommy Bruce, Don Lang, Heinz, Ricky Valance, Jess Conrad, Screamin' Lord Sutch, and Wee Willie Harris to name just a few.

His funeral reflected  everything that was good about Chris, loving father, loyal friend, musician and not least his love for the birds and the environment.
Held at The Herongate Wood,  Green Cemetery where a tree is planted with every burial so that  everything over the years returns to nature. Chris would love that the cycle of life is being renewed.

The service itself was typically  Chris as  the 100's in attendance entered and circled the small chapel the sound of  Chris and his beloved guitar 'Brenda The Fender, playing 'Peter Gunn' rang out and the scene was set for us to hear instalments of Chris's life narrated by the Celebrant, Steven Heath. There were also personal memories from Chris's children, grandchildren and friends  'Lord' Peter Stockton and Bob Burgos, interspersed with more music. 'Rock and Roll parts  1& 2'  a recording by Bill Doggett,  and 'Ghost Rider's in the Sky', and  3-30  Blues,  played  by  Chris.  Pam Ayres poem,  'I Wish I'd Looked After Me Teeth, brought  laughter  from the congregation. Exit from the chapel was accompanied by the sound of Chris playing 'Sleepwalk'. 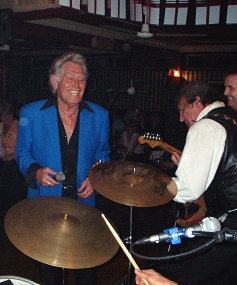 We walked to the graveside  and there said our farewell with the  Lords  Prayer.
The family and Chris's loved ones were joined for the service  by his many fans and representatives of the music world including Brian Poole  lead singer from the Tremeloes, Dave Lodge manager of late Tommy Bruce and Mick Clarke original bass player from The Rubettes.

Those of you who would like to donate to Chris's favourite charity, The Essex Wildlife Trust are invited to do so by going to www.justgiving.com/ewt/donate. If you wish you can personalise the donation with a message in memory of Chris.